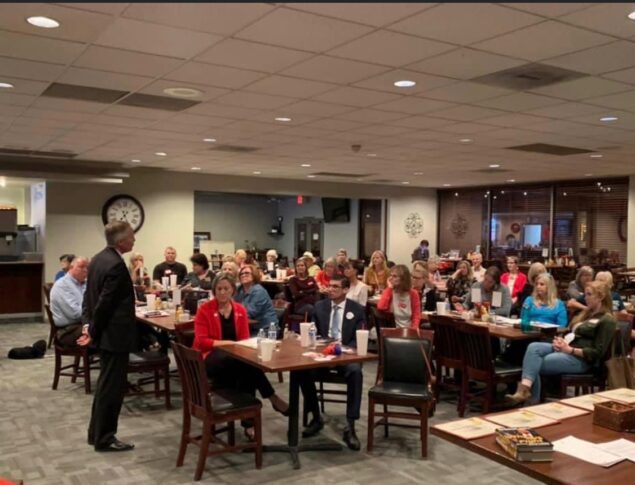 Andrew Gould – Candidate for Attorney General – Andrew was the featured speaker at the Ahwatukee Republican Women’s meeting on October 26th. Andrew gave up his job as Justice on the Arizona Supreme Court to run for AG because he knows that border security and election integrity are two of the issues that desperately need to be resolved in our state. He lived on the border for 22 years, has experience prosecuting cartels, and he spoke to us about setting up No Trespassing Zones on state and private land as Attorney General. He also spoke to us about strategizing a way to fight for election integrity by assigning 8-10 layers to address the issue.

Amanda Beaudoin – Candidate for State Mine Inspector – Amanda introduced herself as a Christian, Conservative, and working Mom. Amanda is a Geologist, and she spoke to us about her experience in mining. She pointed out how large the copper industry is here in Arizona, and how it is growing. She has a Bachelor of Science degree in Geoscience and an MBA. Amanda demonstrated her passion for mining and her dedication to ensure the safety and security of Arizona’s mining industry.

Jeff Fine – Clerk of the Court – Jeff is running for re-election and he also spoke at the meeting. He is a former judge, military veteran, veteran police officer, and is active in the community. Elected in 2018, Jeff brought conservative values, fiscal responsibility, and transformational leadership to the Clerk’s office, resulting in receiving 13 national awards for excellence and innovation in less than 4 years.