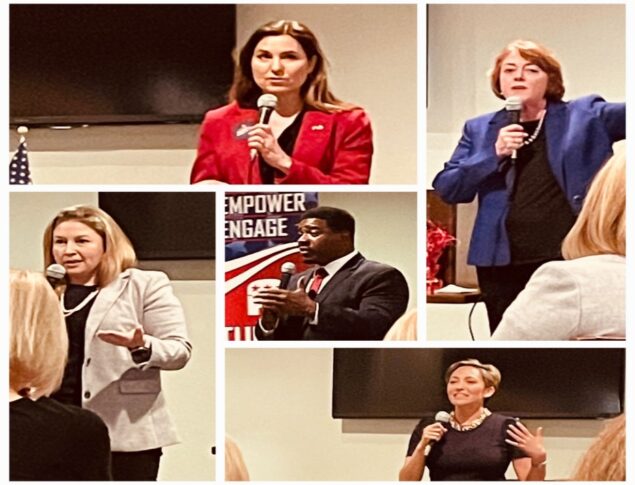 Dawn Grove, candidate for Attorney General, spoke at the February Ahwatukee Republican Women’s meeting on February 22nd. Dawn told us that she decided to become an attorney at the age of 16. Her experience includes serving under Supreme Court Justice Antonin Scalia, working for the National Right to Life Committee, and she is presently the Vice President and Corporate Council for her Arizona-based, family-owned business, Karsten Manufacturing.

Lacy Cooper, candidate for Attorney General, spoke to us about the border crisis, and said she would crack down on the drug cartels. As a Federal Prosecutor, she has prosecuted coyotes, terrorists, and cartel members. Lacy spoke of her visit to Yuma, where 1,000 illegal immigrants enter daily, but only 10 are sent back to remain in Mexico. She also spoke of the need to go back to President Trump’s policy of stopping those who present bogus asylum claims.

Tiffany Shedd, candidate for Attorney General, earned her law degree from the University of Arizona. She and her family live on a farm near the southern border, and they have had to evacuate multiple times due to threats from cartels. She is a strong proponent of the 2nd amendment and is an NRA shotgun and pistol coach. Tiffany is running for Attorney General to defend Arizonans, stand up to the radical left, and defend our constitutional rights.

Jerone Davison, a candidate for the U.S. House, is a Christian, a Pastor for 30 years, a former NFL player and Chaplain, and a graduate from Arizona State University. Jerone spoke to us about issues he’s concerned with such as the need to reform Section 230 and protecting free speech.

Tanya Wheeless, candidate for the U.S. House, told us she is fighting for the American Dream, for families, and for security and opportunity. She will work to secure our border, she supports Police Officers, and believes in a strong military. She will also fight for election integrity and against HR1.