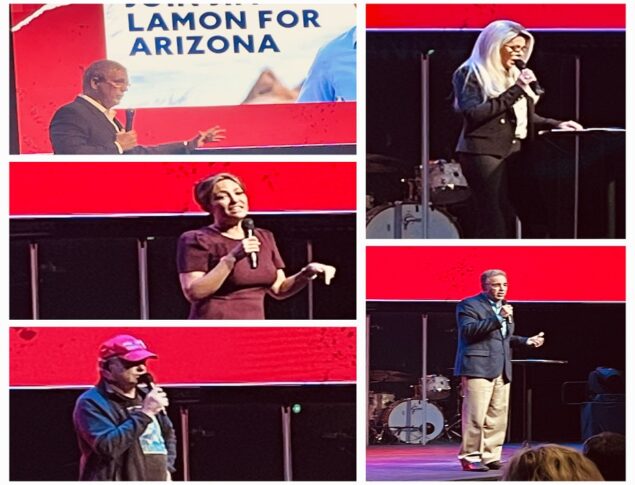 Suzanne Sharer – candidate for AZ State Senate spoke at the February 10th meeting. Some of the many issues she is passionate about are ensuring we have safe and secure elections, securing our southern border, and fighting for gun rights.

Matt Salmon – candidate for Governor served in both the Arizona Senate and the US House of Representatives. He spoke to us about the bills he sponsored on charter schools, workfare, concealed weapons, and term limits.

Tanya Wheeless – running for the Congressional District 9 seat would be the first Latina to represent Arizona in the US House. She is an attorney who has written legislation and has experience interpreting law. Tanya will fight for border security and against big tech, inflation, and HR1.

Dan Schultz – frequent guest on Steve Bannon’s War Room, author, and promoter of filling Precinct Committeeman slots throughout the country, spoke to us briefly about an idea he has to increase the number of PCs. He suggested we contact candidates and ask them to add PC information on their campaign website in order to help increase the percentage of PC slots filled, which is presently 61%.

Jim Lamon is a candidate for the U.S. Senate. He spoke about his desire to take power away from Washington DC and return power to citizens. Jim said he will work to secure our border, and he has the endorsements of the National Border Control Council as well as the Arizona Police Association. He believes we need to return to energy dominance. He previewed one of his western-styled political ads that will run during the Super Bowl.